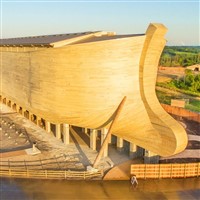 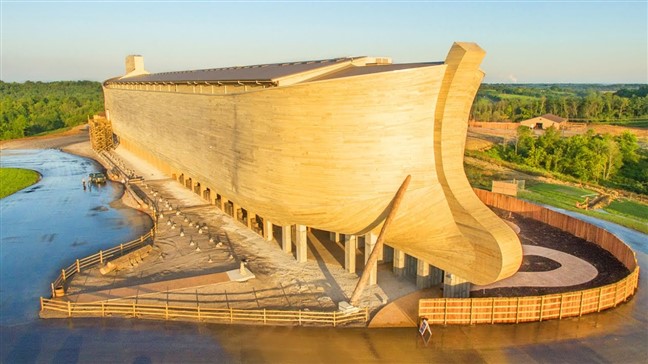 And the story goes…

The Lord saw how utterly wicked people on earth had become; every thought was only evil all the time. So, God said, "I will destroy from the earth the people I have created. And with them, the animals, birds, and creeping things." (Genesis 6:5-7)

God said to Noah, "I am going to destroy all flesh because the world is full of violence. Build an ark of gopherwood, with rooms inside, three decks, and a door. Cover it inside and out with pitch." And Noah did exactly as God commanded him. (Genesis 6: 13-22)

So, Noah and his family went into the Ark because of the coming Flood. And every land animal after its kind went with them, two by two, male and female, just as God had commanded. And the Lord shut the door. (Genesis 7:7-16)

Then the Flood began. The fountains of the deep broke open, and the windows of heaven were opened. Rain poured for forty days and forty nights. The waters rose until every high hill on earth was covered. Everything that lived on land perished in the raging floodwaters. (Genesis 7:17-24)

• Cathedral Basilica of the Assumption Tour

Travelers may be required to walk on uneven surfaces (dirt paths, cobblestone streets or hilly terrain) and up to a distance of 1/2 mile at a time.

Day 1: Monday, April 12, 2021
Join us this morning from the available departure location of your choice, meet your friendly onboard host and driver then settle in as we travel to Sharonville, Ohio today. Enjoy rest and refresh breaks, as needed, as well as a stop for lunch, on your own before arriving at the Drury Inn & Suites Cincinnati Sharonville this evening.
Take part in the Kickback reception available from 5:30-7:00 pm offering many food selections and drinks for your pleasure. The rest of the evening is on your own. If you wish to go out for dinner, Ruby Tuesday and Cracker Barrel are adjacent to the hotel.

Day 2: Tuesday, April 13, 2021
Enjoy a hot breakfast before departing the hotel for the Cathedral Basilica of the Assumption. You do not need to be a Catholic to be enthralled by this beautiful cathedral! From the outside, it is modeled slightly after Notre Dame in Paris, complete with the French Gothic architecture guarded by 26 gargoyles and the many arches. Inside is even more impressive with its many stained-glass windows. At one point, it had the largest stained-glass window in the world measuring 67 ft. high by 24 ft. wide.
The cathedral contains two pipe organs. In the south transept gallery stands the pipe organ designed and built specifically for the cathedral by Henry Willis III during his tenure at the Wicks Organ Company of Highland, Illinois in 1933. Originally three manual keyboards, a pedal keyboard and 43 ranks of pipes, this instrument was renovated and enlarged in 1982.
The mosaics of the stations of the cross are made from 80,000 tiles from Italy! The basilica also includes marble flooring, sanctuary and Baptismal.
Depart the cathedral mid-morning for the Creation Museum. The Creation Museum shows why God’s infallible Word, rather than man’s faulty assumptions, is the place to begin if we want to make sense of our world. This 75,000-square-foot facility allows families to experience earth history as God has revealed it in the Bible. Nearly 150 exhibits feature fearsome animatronic dinosaurs, talking heroes of the faith, and professional displays that honor God’s word. The museum also boasts a fun-filled, 200-seat special effects theater, a state-of-the-art planetarium, a petting zoo, nature trails, and lots more.
At the heart of the Creation Museum is a chronological retelling of biblical history in seven parts called the Seven C’s. Guests step back in time, beginning with Creation, and fast-forward to Christ’s return. Along the way, they see how God’s Word provides the big-picture answers for our most difficult questions, whether about science, the Bible, or our personal relationship with God.
The history of the Bible vividly comes to life at the world-class Creation Museum. On your walk-through biblical history, you’ll encounter a realistic Garden of Eden, animatronic Noah, Flood dioramas, stunning video displays, and much more. Prepare to believe! Enjoy lunch while at the Creation Museum at your leisure with an included lunch voucher.
Depart the Creation Museum this evening and return to the hotel in time to enjoy the Kickback Reception with a complimentary variety of hot and cold foods as well as drinks, including some beers, wines, and cocktails. If you wish, you could have dinner on your own at one of the adjacent restaurants.

Day 3: Wednesday, April 15, 2021
After enjoying a hot breakfast at the hotel we depart this morning for the Ark Encounter. The Ark Encounter features a full-size Noah’s Ark, built according to the dimensions given in the Bible. Spanning 510 feet long, 85 feet wide, and 51 feet high, this modern engineering marvel amazes visitors young and old alike. Ark Encounter is situated in beautiful Grant County in Williamstown, Kentucky.
Looking up at the massive structure and incredible workmanship of the hull is only the beginning of your encounter with the Ark. Their commitment to historical accuracy and artistic excellence continues inside on three decks full of beautifully crafted teaching exhibits that will inspire you to think differently about the biblical account of Noah’s Ark.
Be transported back in time to meet Noah and his seven other family members, who lived aboard the Ark and cared for all the animals during the Flood. See what their living quarters may have looked like, what they could have brought on board, and even what kinds of clothing they wore.
Find out how Noah and his family might have lived on the Ark, from cooking food to sleeping, recreation, and even gardening! There are hundreds of legends from around the world that are all centered on a worldwide flood. Did these legends originate in an actual historical event? What happened to Noah, the animals and the Earth after the Flood? Find out the answers to these questions and more at Ark Encounter.
Lunch is included while at the Ark today with a voucher provided to each person to enjoy at leisure. We depart late this afternoon to return to the hotel for the Kickback Reception, or dinner, on your own at a nearby restaurant.

Day 4: Thursday, April 15, 2021
Enjoy one last hotel breakfast at the hotel this morning before we hit the road and head for home! Enjoy rest and refresh breaks along the way, as needed, as well as a stop for lunch, on your own, before arriving back home this evening.

Below is a list of pick-up points available on this tour.

Below is a list of pick-up points available on this tour.

It is not possible to display the map. This may be due to Google Maps not being supported in your browser.

Search The location was not found

There are currently no departures available on this tour.

The website timed out while searching for the departure dates. Please try again.